Bhutan- "Happiness is a place"

The Bhutanese name for Bhutan, Druk Yul, means "Land of the Thunder Dragon" and it is also famously known as the ‘Last Shangri-La’.

The reasons why Bhutan is famous in the hearts of travelers are, it is loaded with the stories of legends and is dotted with ancient monasteries, beautiful landscapes, and breathtaking views of holy peaks. Just like Nepal, it lies between India and China and has some of the most beautiful mountains that words cannot describe. Give it the name of last Shangrila; it will be more than appropriate. Its culture and heritage are some of the highlights tourists are interested in, and everything that comprises Bhutan is isolated from the rest of the world, yet Bhutan welcomes outsiders with wide-open arms. Let us acknowledge the welcome and be a part of the fairy tale that Bhutan generally boasts in front of you. What you hear will become a memory, and it is one of the few countries in the world which practices Vajrayana Buddhism, and the journey to Bhutan is a spiritual journey.

The Kingdom of Bhutan is known for its culture, architecture, and archery, but in many ways, it has remained a mystery until half a century ago.

The serene country, which is about half the size of India, is cradled between its husky neighbors China to the north and India to the south. Its lands include subtropical savannahs to forests to the unforgiving Himalayas that guard the country’s eastern border.

Bhutan is a fantastic place for individuals in search of a solitary voyage during their travel. Bhutan is a diverse paradise covered with dense forest, exotic wildlife; glorious mountains and indifferent terrains are exciting features of this less understood nation for centuries. With a relatively small population of 700,000 people in Bhutan enjoy a sustainable lifestyle which they inherited from their forefathers. About 85% population of the country still live in small villages sparsely scattered over rugged mountain land. Buddhism, prevalent in the country since the 7thcentury and continues to play an important role in their peaceful lives.

The country has three horizontal regions. The southern layer is the most agricultural where farmers grow fruit, rice, spices, tea, and tobacco. The middle portion has thick forests and copper and coal mines. Agriculture and timber make up about 60 percent of the country’s small and under-developed economy. The northern part, which includes the Himalayas, is non-agricultural and, frankly, can be downright inhospitable.

The landlocked country spans 18,147 square miles. It is served by several small rivers that eventually empty into the Bay of Bengal.

The staples of the Bhutanese diet are rice, buckwheat, and corn. The language is Dzongkha, but several Tibetan or Nepalese dialects are used throughout the country. Dzongkha means, “the language spoken in fortresses.” It has 30 consonants and four vowels.

Most Bhutanese men wear the gho, which is a knee-length robe tied at the waist by a cloth belt called a kera. Women wear akira, a bright, woven ankle-length dress with traditional patterns. It is clipped at one shoulder and tied at the waist. The females also wear a long-sleeved blouse, a toego, under the kira.

The major religious festivals are called tshechus.  Masked dances and dance dramas accompanied by traditional music are common features at festivals. Energetic dancers, wearing colorful wooden or composition face masks and stylized costumes, depict heroes, demons, animals, and gods. The dancers enjoy royal patronage. Technology and natural curiosity have brought a lot of what Bhutan is about to the forefront, but there is so much more for the country to share and for the rest of the world to learn about the Jewel of the Himalayas.

Flag: The upper left portion is yellow and represents secular authority; the bottom right piece represents religious practice. The white tiger represents purity; its snarl, strength. The jewels in the cat’s paws stand for wealth and the nation’s perfection.

Emblem: Contained in a circle, it is composed of a double diamond thunderbolt placed above a lotus, surmounted by a jewel and framed by two dragons. The thunderbolt represents the harmony between secular and religious power; the lotus symbolizes purity; the jewel sovereign power; and the two dragons, male and female, stand for the name of the country – Land of the Thunder Dragon.

Currency: Ngultrum. It is divided into 100 chetrums. The exchange rate in late May was 39.98 Ngultrums was equal to one U.S. dollar.

Tree: Cypress because it is known to grow straight and strong in not the best soils.

Animal: Takin, a combination of goat and antelope. One of its favorite foods is bamboo.

Things to doPopular Activities in Bhutan 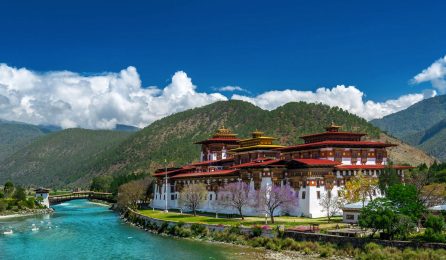 Bhutan is a small country with a land area of 38394 square kilometers. It is a sandwich between China from...
Discover 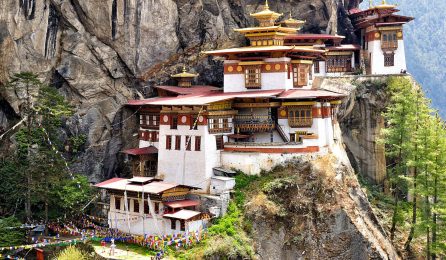 The Paro Tshechu is held every spring and is one of the most colorful and significant events in Paro Dzongkhag...
Discover 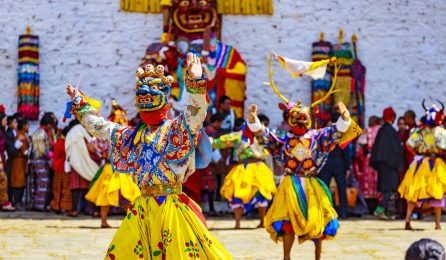 Experience the spectacular Punakha Tsechu (Festival), held in the grounds of the magnificent Punakha Dzong. A Tsechu is a Buddhist...
Discover 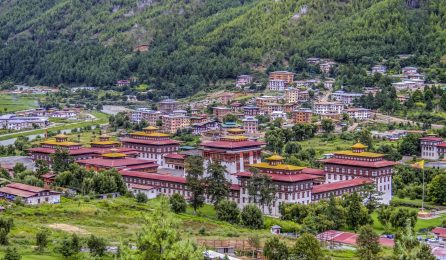 Soi Yaksa Trek involves trekking in one of the most biologically diverse environments in the world. This enchanting trek takes...
Discover 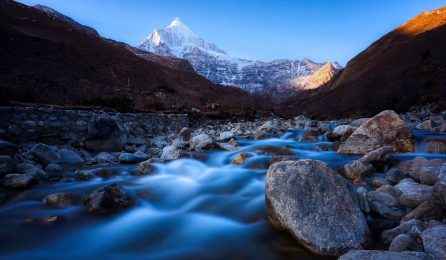 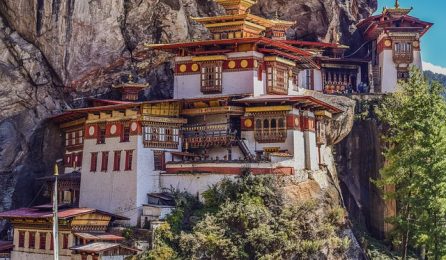 The six day trek is the most popular trek in the country as it passes through a gorgeous natural landscape...
Discover
Popular
Popular